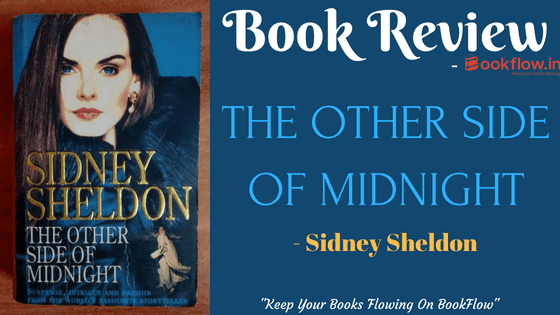 THE OTHER SIDE OF MIDNIGHT BY SIDNEY SHELDON

The other side of midnight is a classic by Sidney Sheldon published in 1973, the book reached no.1 on the New York Times Best Seller list and was made into a 1977 film followed by a sequel titled “Memories of Midnight”. Its a tale of vengeance and the author has lived up to the title of “master of the unexpected”. Writing style of the author leaves you awestruck as to see how two different stories converge into one and how the suspense is unraveled.

The story revolves around four captivating personalities, each one is bound to have an impact. Noelle Page was born in a small town but was incredibly beautiful, she was treated like a princess by her loving father until she realized that her father has sold her for money. She took some money and fled to Paris,after facing survival crisis she met RAF pilot Larry Douglas with whom she fell in love unconditionally. Larry asked her to get a wedding gown so that when he came back they would get married but he was a sheer womanizer who never came back leaving Noelle Pregnant, helpless & miserable. Noelle facing betrayals first by her father then Larry was completely shattered and pledges to take a revenge. She starts using people as a stepping stone to build herself powerful. She seduces her way to become the top actress and later the mistress of the most powerful man, a greek tycoon Constantin Demiris. In the meantime Catherine Alexander, a normal studious girl also finds a way to become the assistant of William Fraser. She was bright, hardworking & generous. While she was about to marry Fraser, Larry enters her life & with his charm marries her. After the world war II was over the life of our four main characters also changes considerably. Larry was frustrated as he has left the RAF and his relationship with Catherine affected badly. Larry later got a job of a pilot for Constantin. When Noelle finally meets Larry after 6 years all her vengeance fades and she fell in love with him again. When Catherine refused to give Larry a divorce, Larry & Noelle plans to murder her. Larry pretends to reconcile with Catherine and takes her for honeymoon where he tried to kill her twice and eventually Catherine was killed. When the case hearing takes place, Constantine tries to pretend to be on Noelle’s side that he would take her back but eventually betrays her. Catherine was the pawn that was sacrificed in the battle of betrayal and vengeance.

‘Hell hath no fury like a woman scorned’ is the perfect glimpse of this book. The writing style used by the author is very gripping and keeps the audience on the edges till the end. The story is told from both Noelle and Catherine’s point of view, its like we have known the characters through out their life time and we have seen them evolve. Its really intriguing how the climax was woven so effortlessly that nobody could have guessed whats coming next. The highlight would be Noelle and Catherine, the two main characters and how they were completely different yet alike. They both fell in love with the same guy. Constantin’s character is very compelling, once you read the ending you will adore him. If you are looking for intense drama, suspense thriller this book is the quest you were looking. And once if read this you can’t stop yourself for getting it sequel Memories of Midnight.