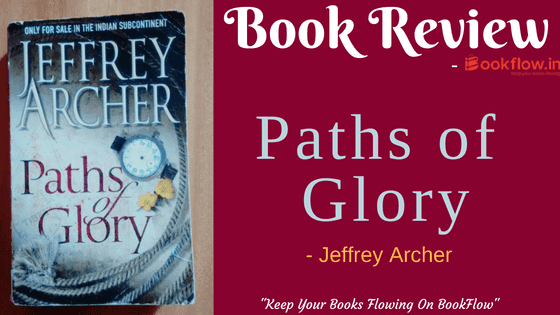 PATHS OF GLORY BY JEFFREY ARCHER

Paths of glory is a classic by Jeffrey Archer published on 3rd March 2009. It is based on the story of George Mallory who died on his quest to climb Mount Everest. It fictionally supports that George Mallory was successful and was the first man to climb Everest before Sir Edmund Hillary. This however created a lot of fuss around the world especially in New Zealand, who took it as an insult against Sir Edmund Hillary. Though the raucous, the book is very inspirational and literally takes us along with George Mallory to the great Mount Everest.

Some people have dreams which are so splendid that if they achieve they would be remembered for a millennium and George Mallory was one of them. Born in 1886, he was a good student who became part of the Bloomsbury Group at Cambridge in the early twentieth century & served in the Royal Garrison Artillery during World War I. George had always been driven towards climbing. He ended up teaching school when he couldn’t get into a PHD program at Cambridge. He found his love of life Ruth, persuades her and then marries. George had always been driven towards climbing, like Eiffel Tower for which he spent time in French Jail and the Basilica in the Pizza San Marco in Venice this time to impress Ruth. His zeal towards his second love Mount Everest kept rising but soon after the first failed attempt he realized a sense of how foolhardy it was, how unpredictable the weather was, how difficult it would be to breathe at such an high altitude, how uncanny it will be cope up with sudden avalanche and lose men, and how can he jeopardize everything without proper measures. He then takes on his second love Everest again with proper measures and till the final page is turned you can decide all by yourself whether George Mallory died on his way to the great Mount Everest or died on his way down.

The writing style of author is very compelling and even we knew the fate of George Mallory from the prologue we couldn’t resist ourselves till the final page. The book starts with the childhood of George and how he showed interest in climbing. The novel also takes us along to the complexities of World War I. The story between George and Ruth is also very intriguing as to how he keeps writing letters to her about everything while on his quest on his second love Everest. The climax and the plot literally marvels us to be speechless and compels us to give a second thought about if George Mallory actually made it to the top or not. Taking from the author point of view and fictional details it certainly looks that author believes he made it to the top. The book has to offer more than just a story of a mountaineer and his expedition to the great Mount Everest rather, its about a story of a man who may have achieved his life long dream and still haven’t acknowledged of or it might not be true but its sure a worth to read.