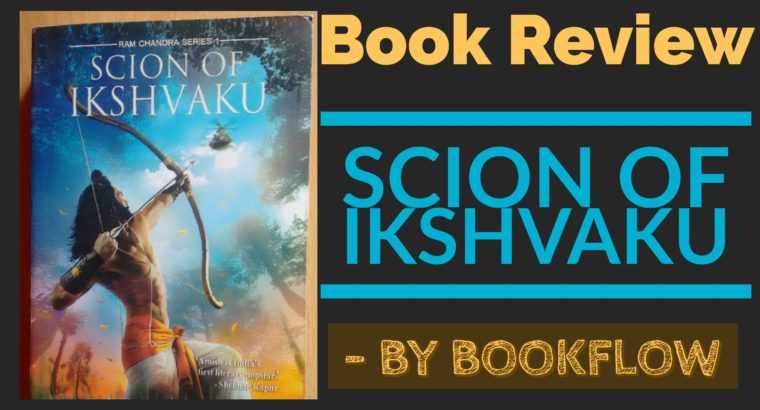 Scion of Ikshvaku is the fictional chef d’oeuvre created by Amish Tripathi, released on 22 June 2015. It is the first book of Ram Chandra series which follows the paradigm of his previous bestseller Shiva Trilogy. The book is set in India 3400 BCE and but not exactly a retelling of Indian mythological epic Ramayana as it takes just references from it and the characters are also not same, however, the author creates a thrilling experience for the readers. It is based on Ram, the legendary Indian king often regarded as an incarnation of Lord Vishnu and his way of building an Ideal society commonly known as Ram Rajya. His vision of the perfect land was unconventional, but perfection has a price and he paid that price.

King Dashrath of Ayodhya, emperor of the Sapt Sindhu frowned by the exceeding demands of trader Kubler decides to challenge him for a battle. The terrible defeat at Karachapa by Kubaer’s general Raavan leaves him devastated as he had never lost a single battle. Kaikeyi and her father save Dashrath’s life, at the same time Kaushalya gives birth to Ram. The coincidence of Karachapa battle and Ram’s birth turns out to be the worst nightmare, as Dashrath and everyone starts believing that the child is born with bad omen and his birth has led to the defeat of Sapt Sindhu. Ram is throughout tormented for the defeat at Karachapa. Later, four princes Ram, Bharat, Lakshman & Shatrughan were sent to the gurukul with Raj Guru Vashistha to study different subjects. In the meantime, Raavan became the new king of Lanka and was imposing huge trading sanctions on Sapt Sindhu and nobody dared to challenge him. After completing their education when the princes return to Ayodhya, politics regarding the successor of the throne become more frequent. Ram was assigned the task of maintaining law and order in which he excels par expectations. One day their rakhi sister, Roshini was brutally gang-raped and murdered when she went to the nearby village to treat poor people. This event created raucous among the brothers as one of accused was juvenile and could not be hanged. Ram was a true follower of dharma & law, he couldn’t punish a juvenile so he suffered in silent agony as he failed his promise to protect his sister. While escorting Dashrath to the jungle for hunting when Ram saves his life from leopard, Dashrath realizes that all this animosity against Ram was gibberish and he decides to make Ram the crown prince of Ayodhya. One day the head of Malayputra tribe the, great sage Vishwamitra visits Ayodhya and asks Ram and Lakshman to help him fight against the asura Tadaka. After which he takes the princes to attend the swayamvar of princess Sita of Mithila. Meanwhile, Raavan lashes out at Mithila for not giving him the preference and declares battle. Though Mithila is saved by Ram with the help of Vishwamitra but the illegal use of asurastra froces Ram to go on exile, Lakshman and Sita accompany Ram to exile for 14 years. Shurpanaka & Vibhishan visits them in Dandak forest and at the end Raavan abducts Sita.

1. Dashrath – The Chakravarti emperor of the Sapt Sindhu, king of Kosala, husband of Kaushalya,Keikeyi and Sumitra, father of Ram, Bharat, Lakshman, and Shatrughan. Descendant of Suryavanshis.Never lost any battle except for Karachapa.

3. Kaushalya – Daughter of king Bhanuman and Maheshwari, the eldest queen of king Dashrath & mother of Ram.

4. Kaikeyi – Daughter of King Ashwapati, second and most favorite wife of King Dashrath, mother of Bharat. Wants Bharat to supersede ram to the throne.

6. Manthara – Most affluent merchant of Sapt Sindhu, mother of Roshini and a strong ally of Kaikeyi.

7. Ram – Son of emperor Dashrath and his eldest wife Kaushalya, eldest of four brothers and later married to Sita. Calm, composed and an excellent archer. He abides law above all and inspires to build a pure land with muscular civilization. He is often referred as the incarnated Vishnu who will fulfill his purpose of life. Known as Sudas in Gurukul.

8. Bharat – Son of King Dashrath and Kaikeyi, loyal to Ram and believes in liberal lifestyle.

9. Lakshman – Son of King Dashrath and Sumitra, twin brother of Shatrughan but solemnly loyal to Ram; audacious and skeptic when senses any danger around Ram, married to Urmila, also accompanies Ram and Sita to exile.

10. Shatrughan – Son of King Dashrath and Sumitra, loyal to Bharat, has all the knowledge about everything.

13. Mrigasya – General of King Dashrath’s army & one of the prominent nobles.

14. Raavan -King of Lanka, brother of Vibhishan, Shurpanakha, and Kumbhakarna.

17. Janak -King of Mithila, father of Sita and Urmila.

19. Urmila – Daughter of king Janak and Sunaina, sister of Sita and later married to Lakshman.Very tender by nature.

20. Jatayu – Captain of Malayputura tribe, a naga, and friend of Ram & Sita.

22. Nilanjana – Senior doctor of the Royal family members of Ayodhya and owes loyalty towards Kosala.

23. Roshni – Daughter of Manthara, a doctor by profession and rakhi sister of four princes.

24. Shurpanakha – Half sister of Raavan.

25. Vishwamitra – Malayputra Chief, also the temporary guru of Ram and Lakshman and sends them to Mithila.

Scion of Ikshvaku is indeed a must read for those who loved his previous bestseller Shiva Trilogy. The writing style is almost similar, however it is slightly fast paced compared to the Shiva Trilogy. Development of character may bother a reader and there is also an attempt to justify things or extracting sympathy for certain characters, for example, the author tries to justify Kaikeyi’s possessiveness to make Bharat the successor of the throne just because she was denied as she was a girl resulting her less deserving brother becoming the successor. However, there are instances where the author leaves you awestruck be it slokas, debate about the muscular or feminine way of civilization, the bond between the four princes or Sita’s character everything was just marvelous. Having said that for those rigid believers of epic mythology Ramayana this book will be completely challenging as the characters are not exactly the same, like Manthara is no longer the maid, she is the wealthiest person in Sapt Sindhu or the battle of Karachapa etc. Amish has kept his imagination & science together with the same way he did in Shiva Trilogy like explaining the Pushpak Viman having rotors, nuclear explosive, Mithila’s structure, battlefield tactics and likewise. I am eagerly looking forward to read its follow-on “Sita: Warrior of Mithila”, it will be interesting how he will finally lead to define a proper way of life & where things will unfold after the abduction of Sita(as you know things will not go as we expect them according to our traditional ways ).

For those who don’t seem intrigued by mythology, this might a life-changing experience.