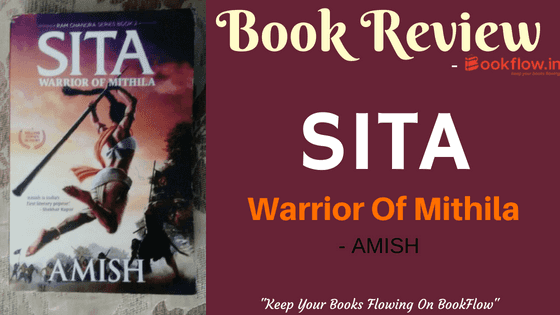 Sita : Warrior of Mithila is the second book of the Ram Chandra series creatively crafted by Amish Tripathi published on 29 May 2017. The book is based on Sita ,the legendary Indian queen who was often regarded as an incarnation of goddess Lakshmi. Sita’s character has been carved so beautifully by the author that you fell in love with the character unconditionally. Author has gracefully penned down everything through Sita’s point of view, unraveling some mysteries created in Scion of Iskhvaku & creating some more till the last page is turned.

Janak, the king of Mithila and his wife Sunaina found a baby girl protected by a vulture, they adopted and named her Sita. Sita was saved by a girl called Samichi when she went there without any guards out of curiosity. Sita is sent to the Rishi Shvetaketu’s ashram for her education, where she learns martial arts apart from traditional bookish knowledge. When she was 14 years old, Maharishi Vishwamitra-head of Malayputra impressed by her skills and knowledge decides to make her the seventh Vishnu but instructs her to keep that a secret. After death of Sunaina, things for Sita became much worse,as now she has a tinder sister Urmila to look after and the entire Mithila to take care of & the secret of her being the Vishnu. Sita in the meantime discovers that there is one more Vishnu candidate Ram the prince of Ayoydhya selected by Raj Gura Vashishtha and about the agony between Vashishtha and Vishwamitra. Sita plans a marriage alliance with Ram through Swayamvar so that they both can work together in partnership for the betterment of society.But things unfold drastically different as her uncle invited the Lankan King Raavan who ended up attacking Mithila for insulting him. Vishwamitra cleverly tricks Ram to fire a Asurastra towards the Lankan army in order to save his beloved wife Sita & her kingdom. Sita knew the consequences of using a biological weapon, that Ram would demand to go to exile for 14 years,she accompanies him along with Lakshman. One day suddenly Vibhishan & Shurpanakha visits them and requests them for shelter for sometime, Shurpanakha fancies Ram,and tries to attack Sita. Things got even worse when Shurpanakha’s nose was injured and they retreated.When Ram and Lakshman went for hunting Raavan along with his troops attacks & abducts Sita. Sita tried her best but could not escape & was drugged, when she woke up she found herself in Pushpak Vimaan.

Amish yet again had been successful in luring audiences with his creative writing, imagination & the plot woven together incredibly to give a thrilling experience. This book is similar to his previous Scion of Ikshvaku, in writing style,pace & storyline as well. Those who reread the previous part to get ready for this one will be slightly distracted as there is a lot of repetition from Scion of Ikshvaku. Apart from this everything was beyond perfect. The highlights were the revelations from the first chapter till the last line of the book. Its galvanizing when author leaves few hints about something and later everything makes perfect sense. Sita’s persona did created an impact as she was completely different from the usual feminine way depicted in Ramayana which compels us to love her even more.Its a perfect blend of science, fiction & mythology. And once you start this one it would be impossible to put it down until you complete it.